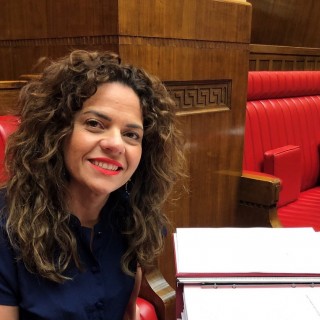 Connie was elected to the Legislative Council at the 2018 state election. She has worked with Nick and the team for over 12 years.

Connie graduated from the University of Adelaide in Law with Honours, before being admitted to legal practice in 2003. She also holds a Bachelor of Arts majoring in Modern Greek and Social Politics.

Connie has worked as key senior adviser at both state and federal levels of parliament. Most recently, she has worked as Chief of Staff to Senator Stirling Griff.

Prior to commencing employment with Nick and the team, Connie worked in a community legal centre and undertook pro bono advocacy work in the Greek community and wider community in SA. This work has continued throughout her career.

Connie is committed and driven to working directly with people on issues that affect their lives. She believes a little bit of political will can go a long way in changing the lives of ordinary South Australians and is resolute in her determination to make that happen.

Connie considers her work with asbestos victims in successfully advocating for, and the subsequent passage of, legislation establishing the South Australian Dust Diseases Tribunal, as her most valued contribution.

Connie has been married to John for over 10 years. They have one cherished little son, Paul, and a cheeky dog named Millie.

Connie can be contacted at her Parliament House office on (08) 8237 9259 or via email at bonaros.office@parliament.sa.gov.au