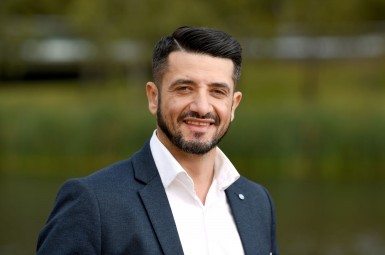 Keyvan is a respected psychotherapist who will run as number 2 on the SA-BEST Upper House ticket.

Born in Iran, Keyvan is a mental health and addiction psychotherapist who is highly respected for his tireless professional, volunteer and mentoring work, including in the South Australian Middle Eastern and Indigenous communities, as well as with our war veterans.

An asylum seeker who arrived in Australia on a refugee boat from Iran in 2000, Keyvan runs his own private practice in Adelaide which specialises in counselling people with addiction, trauma, mental health, Domestic Violence and cultural issues.

He’s also a frontline manager at a drug and alcohol service and mentor to many young people in his community.

“I am determined to ensure the community has a stronger voice in Parliament and believe SA-BEST is the best vehicle to enable me to do that,” Keyvan said.

“Successive Liberal and Labor governments have failed the people of South Australia,” he said.

“I work at the coalface of the community and witness every single day people who are impacted by poor decisions made by governments."

“Living costs continue to skyrocket, small businesses are struggling in the COVID pandemic, hospital and health care services are deficient, drug addiction and people suffering mental health issues are at record levels – yet the government’s flagship election promise is to build a $620 million entertainment stadium in the CBD that the state can’t afford and doesn’t need."

“Both major parties have shown time and time again how wrong their priorities are."

“That needs to change urgently and the only way of achieving that is to ensure the government of the day is kept accountable and transparent."

“SA-BEST will guarantee that occurs if it has the balance of power in the Legislative Council.”

Keyvan’s own personal lived experience is inspiring to say the least.

He fled to Australia as an unaccompanied minor from Ahvaz in Southern Iran in 2000 aged 15 years. As a Mandaean - a small and ancient cultural group who are severely persecuted in the Middle East – he feared for his life.

As an asylum seeker, he was held at the Woomera Detention Centre where – with very little command of English and feeling powerless but with dreams to get educated - he taught himself to read for 5-6 hours a day.

To support himself through university, Keyvan drove taxis at nights.

It all paid off. Keyvan has a Bachelor degree in social work, a Masters in Mediation & Conflict Management and a Doctor of Philosophy from Flinders University.

He runs his own private practice in Adelaide which specialises in counselling people with addiction, trauma, domestic violence, mental health and cultural issues.

With his lived experience and professional background, Dr Keyvan has walked in the shoes of many of the people he is seeking to represent.