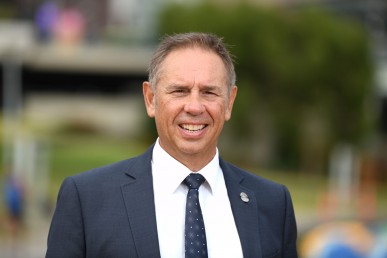 Ian Markos carved a distinguished reputation for himself advocating “without fear or favour” for South Australia’s crucial building and construction industry as head of the Master Builders Association.

It was a passionate skillset that saw him respected by all sides of politics.

The key – he was prepared to go into bat for either employers or employees depending on the issue at hand.

It is this same passion – combined with his love for the state - he hopes will help him win a seat in Parliament as SA-BEST’s lead candidate in the Upper House at next month’s state election.

“I'm at a stage in my life where I'm unable to stand on the sideline anymore. Both major parties are ignoring the needs of South Australians – and that must change,” he said.

“I want to help SA-BEST provide South Australians with a powerful third voice in Parliament to ensure we have practical, common-sense solutions to the critical issues impacting our state.

“We need a political party that will - without fear or favour - stand up for ALL South Australians and hold both major parties to account.

“I’ve done it before and I am prepared to do it again for the people of South Australia.”

“In order for the state to progress, we need strong leadership, a mindset that we can always do better - and the political courage to make that happen.

“For too long we have seen the two major political parties consumed by self-interest, internal politics and factional deals, ignoring the needs of the South Australian public.

“We need an alternative third choice - a choice that gives South Australians the chance to elect a political party who is their ‘Elected Employee’ - whose main priority is working for them.

“I strongly believe SA-BEST is that party. It is the only centrist political party in SA not shackled by blind ideology, political factions or vested interests.

“As people in the building and construction industry know, I am very competitive. I like to win so I wouldn’t have decided to put my hat in the ring if I didn’t think I/we would be successful in winning another seat in the Upper House at next month’s state election.”

If he wins a seat in Parliament, one of his – and SA-BEST’s - first priorities would be advocating with whoever wins government to abolish stamp duty for first home buyers.

“This is a no brainer as far as I am concerned. I pushed hard for it as the MBA’s CEO and I will push hard for it again should I be elected,” Ian said.

“Successive state governments have strongly resisted such a policy for fear of a drop in revenue,” he said.

“This is an absolute nonsense - enough evidence has been given to these governments which demonstrates their coffers would receive a positive return as a result of this policy.

“The great Australian dream of owning a home is becoming just that. A dream which may not ever be fulfilled by young South Australians.

“Adelaide’s median house price is a record high $540,000 with predictions it will increase by 20% over the next two years, pricing many out of the market completely, creating a new generation of renters with a ripple effect of more homelessness in our community.

“Housing affordability is one of the major problems which SA-BEST will urgently prioritise.”